Ambiversion: Stuck in the Middle

I’ve never been interested in “sales”—not in the workplace or in my personal life. Hell, I’m afraid to get my oil changed due to potential unnecessary upselling, let alone buy a new car. And with a recent book title To Sell Is Human, I thought Daniel Pink would definitely not be the kind of writer I’d be interested in. But with nowhere else to be during the last hour of HubSpot’s annual INBOUND marketing conference last month, I grabbed a seat at his spotlight presentation. 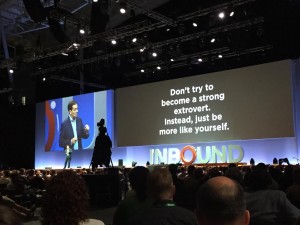 Pink started out by asking the audience what comes to mind when hearing the term “sales” or “selling.” Random words were shouted from the various folks in the audience: Pushy. Sleazy. Manipulative. Used car salesman. All terms I was thinking as well. He went on to explain how sales has always carried a negative connotation due to a world of “information asymmetry.” When the seller has more information than the buyer, then the seller has the ability to easily rip off the buyer – hence “buyer beware.”

But now with accessibility to information, reviews, pricing, etc., the buyer can be just as knowledgeable as the seller, so information asymmetry is on its way out and the negative connotation will likely soon follow suit. Another reason sales might become a more positive term, according to Pink, is that we’re all in sales now. In To Sell Is Human, he references the U.S. Bureau of Labor Statistics, which states that one in nine Americans works in sales. Pink believes that, sure, one in nine Americans works in sales, but so do the other eight. Maybe not necessarily for money, but we all spend our days trying to persuade others. We’re all salespeople now.

Of course I was thinking, Hah, me? I couldn’t sell a thing. I don’t have the sales personality. But as he explained this concept in a little more depth, I thought about how I’m constantly trying to convince my co-workers to stay on schedule. Or go in on a pizza for lunch. Without acting like a used car salesman.

Pink went on to cite a study on introversion and extraversion with relation to sales, which he also references in his book. The study was conducted recently by Adam Grant of the Wharton School of the University of Pennsylvania. Grant’s findings showed that people who fell at each end of the spectrum weren’t very effective salespeople, but the people who fell in the middle were the most effective salespeople. The ambiverts—not overly introverted or overly extraverted; just a little of both.

What’s more is that Pink believes most people fall in the middle, so there’s a good chance you’re an ambivert. Take his assessment to see where you fit into the mix: http://www.danpink.com/assessment/

In case you’re wondering, I’m an ambivert. And hopefully I’ve at least sold you on checking out Daniel Pink’s new book. Or taking his assessment. Or at least Googling his name.

If you liked this blog you might also be interested in reading: Multitasking: The Arch Enemy of a Productive and Happy Workplace