Posted on November 18, 19 by Rebecca Rudell

Every once in a while, we like to show off one of our hard-working, detail-oriented problem solvers. Take a moment to see who's in the spotlight today! 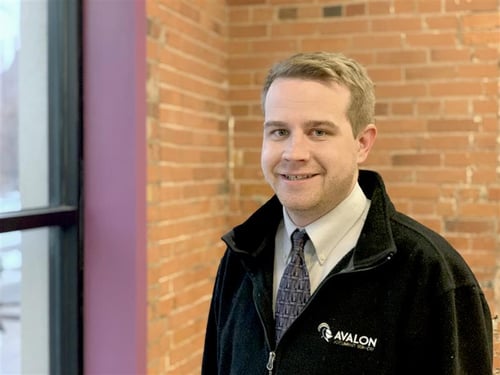 My sister Hilary started working at Avalon shortly after they opened in Buffalo. I was in the produce department at Dash’s Market at the time and was sick of working weekends and holidays. I decided it was time to find a new job. So, when a position in service opened at Avalon, I applied, but was too late, as Jack had already been through the interview process and was offered the position. Soon after that, the Director of Service, Mike, decided to move on. Once again, I applied. I interviewed with JP, then Jack, who was promoted to Director of service, and then had to drive to Batavia to meet with Mike Byrne for a third interview. I remember thinking as I drove out there: “After all this, I better get this job!” Jack called me later that day to offer me the position. That Thanksgiving was pretty lively with my family teasing me that my sister would now be my boss, to which I responded that since she was older, she’s always been my boss. Those early days were baptism by fire. Jack and I figured it out and I learned on the fly with lots of help from Hilary, Ashley, Tim, Kelly, and Rob.

My two favorite things about working here are: 1) There is never a dull moment and 2) we always strive to be the best. Every day brings a new logistical challenge. I love that each day is different and that I can use my problem-solving skills to help get the job done. I also love working for a company that truly puts the customer first. We always strive to get projects completed on time and exactly how the client wants it. I love that the phrase “Good sucks, be GREAT” is an integral part of who we are at Avalon.

When I first started here, my goals were to help our clients look great and develop a reputation of being a great CSR. In my almost eight years with the company, I have tried to stay true to that. As long as I know I’m doing my best every day, I can be proud of the job I’m doing. By becoming Director of Service, I like to think that I have partially accomplished my goals. My favorite part of being the director is that I get to set the tone for my whole team. I try to lead by example, and to never ask my team to do something I wouldn’t be willing to do myself. I’ve had a lot of help during my time here and I’ve learned from a lot of great people. Being one of the more senior members of the team now gives me the opportunity to give back and help my team grow and learn as I did.

I’ve had quite a few. The most recent is one of the proudest for me personally. At this summer’s Great Huddle, I was given an award that I didn’t even know existed. The PropEller award was given to me because of all the props I gave to my fellow team members. It made me feel great because it meant I was taking the time to be grateful for my fellow team members, and even though my day can be busy, and things can get crazy, I wasn’t taking them for granted. I’m proud of this award because I was doing it without knowing it was being kept track of or that I’d be given something back in return. I was doing it because I wanted to acknowledge others and highlight some of their contributions.

Taking care of emails, phone calls, walk-ins, and deliveries are my primary functions. I get in around 7:30 a.m. and see what needs to be done. At some point, either Danielle or I get the cookies in. We check the pickup log early, so that if anything is lingering from the day before, we add it to the day’s delivery list. A few weeks ago, there were three days that had deliveries that needed to be at their destination before 8:00 a.m. Those days I get in and just hit the ground running! We try to get as much billing done as early as possible, so that all projects are delivered with an invoice. Then it’s time to get the CSRs on their first loops. As the day goes on, there are usually a few curveballs and priorities change constantly. There is more than one task to be done at any given time and we keep the balancing act going right up to the end. Usually, it’s not until 4:30, 5:00 or later that we can take a breath and see what’s left to do before going home.

So many great memories. Just as every day brings its challenges, there are also plenty of opportunities for a laugh or two along the way. A story that brings the two together would be the time a squirrel fell into our vents from the roof and was scratching around in the air ducts. Rob and I decided that something had to be done to save the poor little guy. We took the vent apart, so that one end was exposed. Then, we tied a garbage bag to the open end and put a cookie (what else?) in the bag to lure him in. We figured he’d go for the cookie, the bag would fall, and we could pick it up and rush him outside. That little trickster had other ideas, however, and was somehow able to get the cookie without falling into our trap. Rob and I decided we’d repeat this method again, but this time, I’d be under the vent with a garbage can and Rob would knock him in with a broom. As the little guy appeared to get his second treat of the day, I held the can under the vent and Rob swatted. But once again, we failed…or so I thought as I never felt anything fall into the can. Disappointed, I brought the can back down to ground level only to see our furry friend sitting at the bottom. I rushed out the back door, through the garage and released him to freedom, and all was right with the world…until a bird got into the office a few years later. But that’s a story for next time.

I listen to a ton of different music. I carry around my 120 GB Ipod Classic with over 9,000 songs on it and usually have a different playlist depending on the crowd. At heart, I’m a rock and roll guy. Most of what I listen to is rock from the late 1950s up to and including the 1980s. But there’s a lot more than just that.

I don’t know if the series can be called a must-read for everyone, but certainly anyone who enjoys the genre or has seen the show needs to read “The Song of Fire and Ice” (“Game of Thrones”) series. It has so many more storylines and characters than the show, and even though they are massive books, they are quick reads. I couldn’t put them down and can’t wait until the next book comes out. I’m keeping my fingers crossed that the books give me more closure and have a more satisfying ending than the show did.

I don’t know that this is my favorite, but it comes to mind now because he just passed away. One of my Grandpa’s great lines regarding work, being on a team, or belonging to a club was: “Find the number one person there and try to best them.”

So many places in the world to go I can’t just pick one. You’ll have to indulge me and let me narrow it down to three. #1 would be Ireland. I need to see the entire island before I die. I love Irish culture and music. My mother’s side of the family is Irish, and I’d love to be able to do a family trip with the whole lot of us, but I’d be afraid that some of us would never want to leave. #2 would be Hawaii because my fiancé really wants to get there someday, and I’d love to go there with her. Lastly, #3 is a little town in Norway called Kleppe. I think it would be pretty cool to be in the town my last name came from.

If you were stuck on an island and could only bring three things, what would they be?

Satellite phone with a list of international aid phone numbers, a multi-language translation device, and an ocean-worthy boat.

I really enjoy spending time with family and friends. My favorite day is hanging out on a beach or a lawn playing games, listening to music, and enjoying adult beverages. In the summer, I love riding my bicycle, and playing soccer and soccer golf. I’m also in a kickball league, and enjoy swimming, hiking, and having fires. In the winter, I love indoor soccer, going to trivia on Thursday nights, playing board games and card games, watching movies, finding new music, and spending time on my hobby, which is making clay figures. I’ve also been known to do karaoke every now and again as well!